For an investment of approximately $ 400 Canadian, it is possible to align the mount on the Celestial North Pole (PNC) with an accuracy of up to 30 arc seconds (30 ″ arc). She asks to use a German equatorial mount. The PoleMaster software is used with the CCD camera dedicated to him. This precision will allow exposure times of 10 minutes or more per photo. Usually, polar alignment can be achieved within 2-3 minutes after starting the software. This is the revolutionary method to align the mount on the axis of rotation of the Earth in record time!

Here is the procedure I produced for using the software Pole Master. It includes certain details for using the application properly.

Installing the camera, driver and software

View user's Guide of the PoleMaster for all the details. 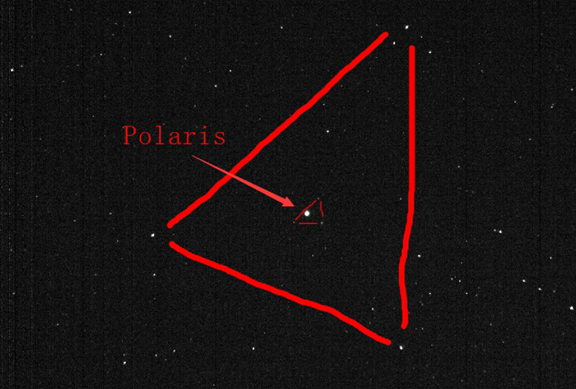 Use the Zoom menu to display the entire image. 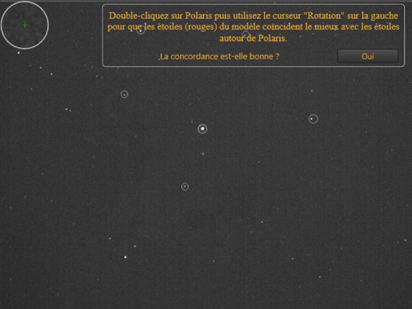 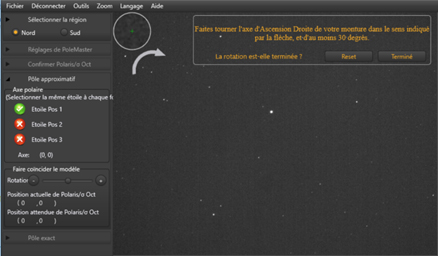 Considering that the MES on the Cabin Crew Member with Pole Master is very precise, going up to 30 '' of arc, an alignment (or calibration) of the mount on a single star is sufficient. No need to align (calibrate) the frame on two or three stars and even more. Thus, the frame calibration procedure will be much faster. Referring to the owner's manual for your GoTo equatorial mount, choose the single star alignment. Personally, with my CGEM mount, after MES using Pole Master and the calibration of the mount on a single star, I succeeded in displaying the object to be imaged directly on the screen of my imaging camera!

In summary, MES is carried out in 3 stages:

Although the procedure described above seems long and complex, with getting used to and memorizing the various steps, it only takes a few minutes to complete. If you ever hang your mount by accident resulting in loss of MES, you will greatly appreciate this quick MES procedure on the Cabin Crew Member.

Note 1: Correction to take account of atmospheric refraction (step 10 above)

Atmospheric refraction is an optical phenomenon which consists of a non-rectilinear path of light crossing the atmosphere and which is due to the variation of the density of the air with altitude. The following graph shows the importance of the deflection of light when approaching the horizon: 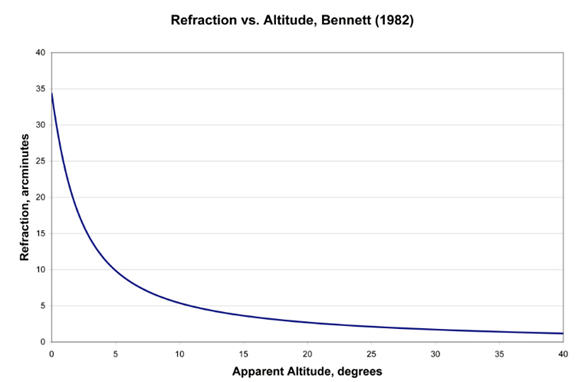 Here are examples of corrections made by Pole Master depending on the cabin's latitude (1 pixel = 0,5 'of arc or 30' 'of arc):

Note 2: Precise adjustment on the PNC

If the green target moves randomly in several directions preventing it from aligning in the red circle (which represents the PNC very accurately up to 30 '' of arc), it means that the stationing (MES) on the PNC is not good. MES must be restarted from the beginning. Before starting over, pay attention to the following points: