For the photography of emission nebulae, it is recommended to produce the luminance image with the Hydrogen-Alpha (H-Alpha) filter. This filter will bring out all the contrasts and nuances of the gases and dust of the nebula for the reason that they emit the majority of their luminosity in the color red. When this image is stitched to the RGB image, the red colors will appear salmon-red or pinkish. The reason is explained by the importance of the nuances and contrasts offered by the H-Alpha filter which helps to attenuate the red color (as well as the other colors), making it appear salmon or pink. We can explain it in large part by the bar of tones of the color red here:

This red color tone bar was produced from an 8 bit image. It brings out the tones of the color red from 0 (black) to 255 (white). Between these two extremes, we can appreciate the different tones of the color red. When stitching the H-Alpha image, the red colors are toned down or shifted to the right (instead of the center). This leads to the appearance of this famous pink color, which makes enthusiasts swear so much who use the H-Alpha filter as a luminance image to produce their color image according to the LRGB technique described in this site. It should be noted that the tone bar largely explains the problem, because there is also a mutation from the color red to the color salmon thus offering a pinkish-salmon color!

Here is the presentation of two techniques to correct this problem:

Following several readings and research on the Web, here is one of the best techniques to correct the color red-salmon. Before performing this technique, the following parameters must be respected:

Instead of stitching the RV and B layers together to produce the color image, we are going to merge the image H-Alpha with the picture Red with Photoshop:

The image Ha + R thus produced will be used as a replacement for the image Red to create the color image (Ha + R) VB. For more details on the treatment, see the LRGB Image Routing Graph and follow the right section for pictures red, Green et Blue. Go to the end of the process just before assembling the Luminance and RGB image.

We have just created an image (Ha + R) - (Ha + R) VB which presents all the nuances of the nebula with more natural colors as much for the nebula as the stars and thus correct or attenuate the red-salmon color of the nebula.

To see examples of images produced with this technique as well as other variations in the process, see the website section of Robert gendler (in English) dealing with this topic.

When the H-Alpha Luminance image is produced in Bin 1 × 1 and the RGB images in Bin 2 × 2, the technique presented above will not give good results, as the final image will no longer be in focus. same resolution. The stars will be blurrier and larger, presenting a lower resolution image. If the number of images per layer is different, for example ten images for the H-Alpha channel and less than five images for each of the RGB layers, the Signal-to-noise ratio will be lower for the RGB images, presenting a more color image. noisy and thus of lower quality.

To overcome all these problems, it is therefore necessary to keep the H-Alpha image as a luminance image in the case mentioned above (H-Alpha in Bin 1 × 1 and RGB in Bin 2 × 2). By overlaying this Ha luminance image over the traditional RGB image, all of the detail and depth (the S / N ratio) of the H-Alpha image will be preserved in the resulting HaRGB color image. On the other hand, by reverting to a standard HaRGB image, there will remain a dominant salmon-red in the image.

Here is the procedure (with Photoshop) to correct (or attenuate) the salmon-red color of the nebulae produced with the traditional technique. LRGB :

Here is the presentation of the Veil Nebula (NGC6992) image before and after the above treatment:

By comparing the two images with the red color tone bar, we see the following on the corrected image: 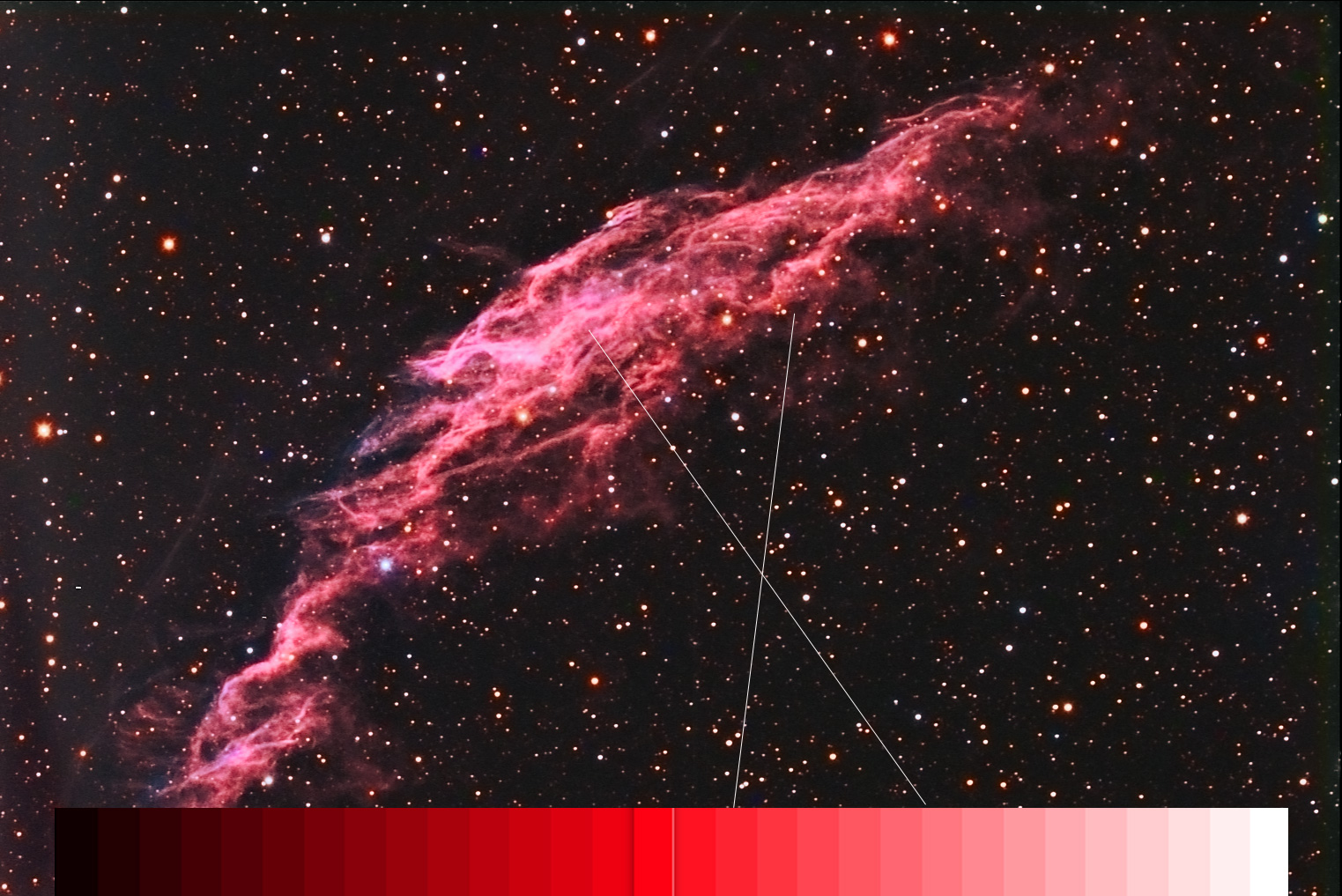 Here is the corrected image with a direct comparison with the tone bar of the color red. We can appreciate that the different red tones of the nebula correspond to those of the tone bar. The exposure times are: H-Alpha (10 x 5 'bin 1 × 1), RGB (3 x 2' bin 2 × 2 each). 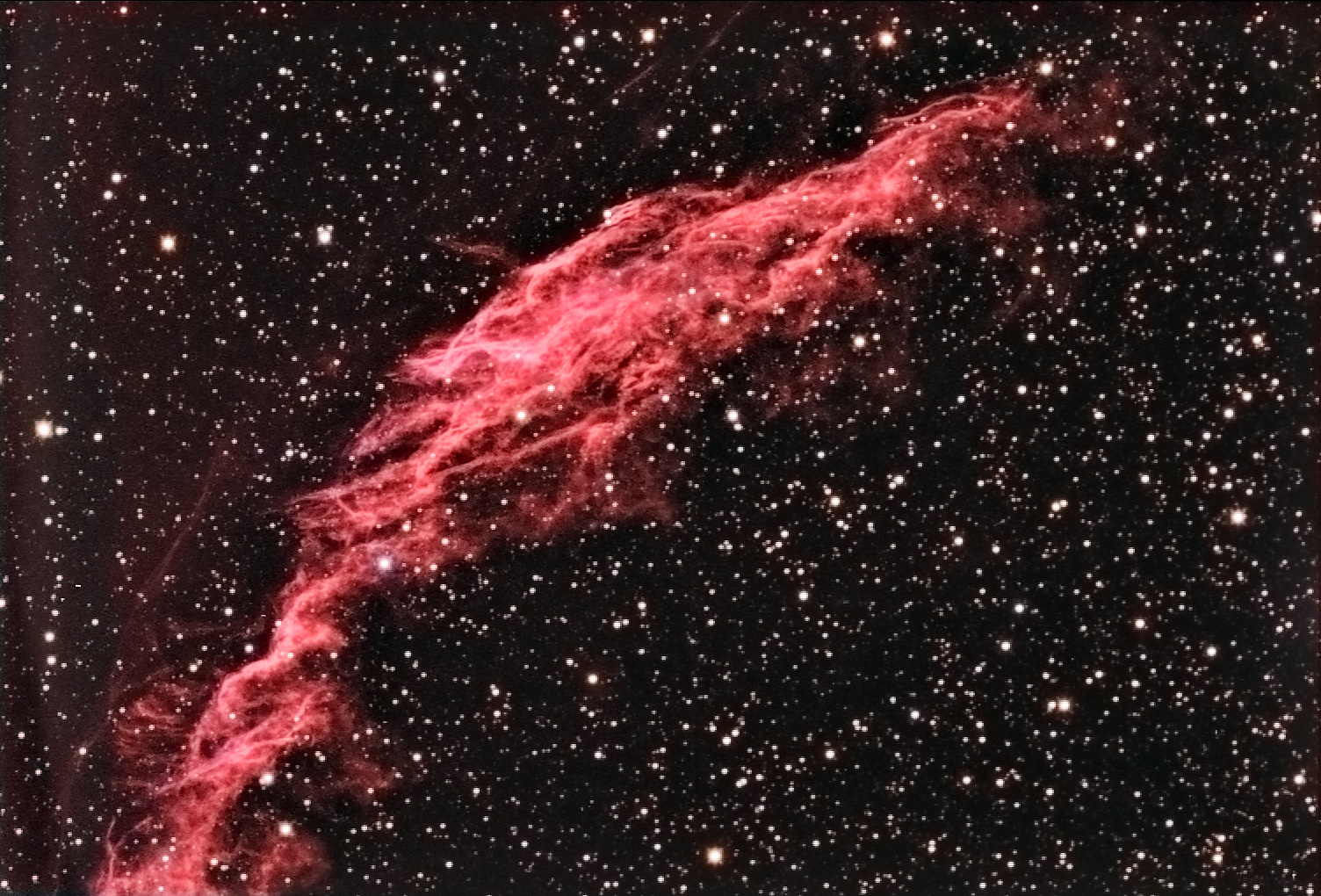