Here we are at the stage of acquiring images of deep sky objects. To achieve this crucial step, everything that has been described in the previous sections will be used. It is therefore important to understand and master these sections before starting to produce the images of the object itself.

Make composite images of the object to be photographed

It is advisable to use the same software that will be used for the acquisition and preprocessing of deep sky images. The results will thus be maximized. It simply consists of taking the photos of the deep sky according to the chosen exposure time. If you have a camera that can be cooled to a constant temperature, use the lowest temperature possible. This is because the background noise in the image halves with each lowering of the temperature by six degrees Celsius. This will therefore make it possible to maximize the signal / noise ratio of the image.

Several software programs offer the option of Dithering when capturing photos. I recommend you to use it, as this feature will later remove noise such as hot and cold pixels left over by using some compositing methods eg Sigma-clip. For more information see the section The different compositing methods of this website.

Even if you have a GOTO mount, it is not easy to bring the object into the field of view of the CCD camera. It is good to know that many GOTO mounts offer high precision aiming, allowing the object to appear in the camera's field of view. I therefore invite you to check if this function exists for your frame by consulting the user manual. Here is the procedure with my CGEM mount:

The procedure is much the same for mounts which have this very useful function for centering the object in the field of view of the imaging camera.

There is another way to precisely center the object to be imaged in the camera's field of view.. We use a software which allows the astrometric calibration (Plate Solve in English). To achieve this centering, it is necessary to dedicate the control of the mount to a software other than that included in the joystick of this one. Here is a non-exhaustive list of software that allows you to perform this centering:

Using these software, it is possible to precisely center the deep sky object remotely using the software TeamViewer for example.

When acquiring images, most astronomical software offers the possibility of adjusting the histogram on the screen. It is important to note that the adjustment only affects the displayed image. It does not modify the image that will be saved on the hard drive of the computer. On the other hand, this histogram makes it possible to visualize the information which is captured by the camera according to the chosen exposure time. Here is an example of a histogram: 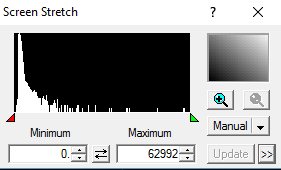 Suppose the chosen exposure time is 5 minutes per frame and you want to take 10 for a total exposure time of 50 minutes. Before you begin, take a single 5-minute test photo. The histogram will display the resolved values ​​of the image similar to the histogram above. The information in white represents the resolution of the image starting from the left for the darkest values ​​(including the sky background which is never opaque black) going to the right for the lightest values ​​(which mostly represent the stars). By moving the red cursor to the right and the green to the left, we can analyze the information captured and validate that the exposure time chosen is long enough to reveal enough details on the object.

If we look at the image without manipulating the histogram on the screen, it appears dark. This should not be worried, because the treatments that we will see in the next section will resolve the image and reveal all the details from the darkest to the lightest.